We hit Spokane’s all time high temperature one year ago

SPOKANE, Wash.– On June 29, 2021, weather instruments in Spokane recorded an all-time record high temperature of 109 degrees Fahrenheit. It would be the third straight day above 100°  in the Lilac City and there would be a fourth the next day before the heat started to ease up.

The June-July Pacific Northwest heat wave of 2021 was unprecedented in the known history of this region. Combining the states of Washington, Oregon and the province of British Columbia, Canada, over 800 people died as a result of the unrelenting heat.

Washington set a new state record high temperature at the Hanford site: 120°. The previous record of 118° was tied in the Tri-Cities while Ephrata (115°) and Omak (117 °) both set new all-time records. North Idaho would reach into the top three for all-time highs in Lewiston, Coeur d’Alene and Sandpoint.

The overnight heat set records, too. Spokane’s all-time warmest low temperature was set on the morning of June 30 (78°).

North of the border, Lytton, B.C. hit 121.3 Fahrenheit, which is Canada’s all-time highest temperature. Lytton later burned to the ground in a wildfire mostly caused by the after-effects of the heat wave.

Damaged structures and vehicles are seen in Lytton, British Columbia, Friday, July 9, 2021, after a wildfire destroyed most of the village on June 30. (Darryl Dyck/The Canadian Press via AP)

The heat would worsen the drought in the region in a matter of weeks and was a direct contributor to the over 1 million acres of land burned in the 2021 fire season across the Northwest.

The role of climate change

In a study by the World Weather Attribution group, 27 distinguished weather and climate scientists from around the world, the heat wave was found to be a 1 in 1,000-year event. That means there’s 0.001% chance of something like this happening again in any given year. The study also concluded that such a heat wave would have been almost impossible were it not for the recent decades of global warming. If greenhouse gas emissions were to continue unabated, the study said, the odds of such a heat wave happening again could go as high as 1 in 50.

A new study at Gonzaga University is aiming to help Spokane prepare for this possibility. Temperatures in urban centers can be much higher than in the surrounding countryside because of the heat-absorbent concrete and asphalt. This can be corrected somewhat by planting trees for shade, according to Dr. Brian Henning with the Gonzaga Center for Climate, Society, and the Environment. 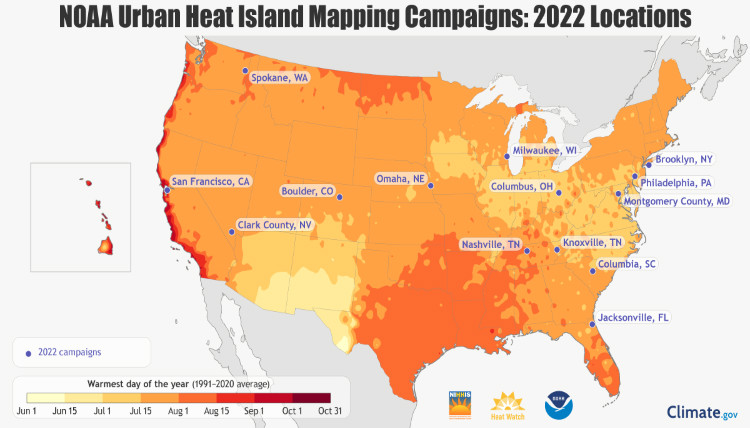 Later this summer, a team of volunteer drivers will haul temperature sensors around the city to find these urban heat islands. Henning will use this data to make a heat map of the city. He hopes this map will influence where cooling centers are set up during future heat waves.

“Really, there’s no reason in the 21st century in America that people should be dying of extreme heat,” he says.

If you want to volunteer for the Spokane Beat the Heat program, click the link below to learn more and sign up.

Washington state employees no longer required to get COVID booster

Perseid meteor shower could be a dud this year

Golden Handle Brewing serves up craft beer for a cause

'Your honor, I was a broken man': Spokane doctor pleads guilty to charges he tried to hire hitman on the dark web

Man sprayed by skunk during arrest in Deer Park outside church

Washington state employees no longer required to get COVID booster