Yakima shooting highlights rise in gun violence across America in 2023

YAKIMA, Wash. -- Three people were killed in Yakima early Tuesday morning after a man opened fire inside a Circle K. It's the latest in a growing list of deadly and violent shootings nationwide.

According to the Gun Violence Archive, there have been 39 mass shootings in the first 23 days of 2023.

"Here we are in little Yakima, right on the heels of California, dealing with much the same thing," Chief Murray said.

"What we saw on the video and what was described by witnesses, there was no interaction between him and the people, they were just sitting there getting food and got surprised by this person who came in, and literally as he was opening the door, he started shooting these people," said Yakima Police Chief Matt Murray.

Police say Haddock then walked outside and shot a third person.

"I was asked, 'could this be prevented?' Boy, I don't know how. I mean, he just came in and did this. I mean it'd be really difficult to defend yourself, even if you were a highly trained person because you wouldn't know this threat was coming," Chief Murray said.

Yakima Police said a woman called 911 after Haddock used her phone to call his mother.

"He then called his mother and made several incriminating statements, including, 'I killed those people.' He made several statements in front of her that he was going to kill himself," Chief Murray said.

The search for Haddock ended in the afternoon, when police say, they didn't fire, but heard gun shots. The Yakima Police Department says Haddock killed himself.

The Yakima Police Department said they did have a record of Haddock before this incident. The investigation is still ongoing. 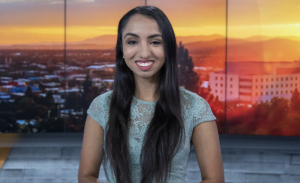 Rania Kaur is a multimedia journalist and producer at 4 News Now. Previously a reporter at KPLC-TV in Lake Charles, Louisiana, she reported on two catastrophic hurricanes, a winter storm, historic flooding and the pandemic. She stumbled into journalism after being a biochemistry major at Seattle University and immediately fell in love. Originally from Kent, Washington, her favorite things about Spokane are the weather, the parks and the people — she can’t wait to meet more of you. If you see her around say hi!  She loves a good restaurant, so if you have any recommendations feel free to tell her. In her free time, you can catch her cheering for the Seahawks, binging Netflix, reading a book at a new coffee shop, or practicing Kirtan at the Gurdwara (ask her what that means)! If you have a story idea, you can email her at raniak@kxly.com, but you can also find her on Instagram, Twitter, and Facebook.