The fifth season of The Crown introduces a new cast taking Queen Elizabeth II into her turbulent twilight years. Alan Jackson receives a Lifetime Achievement Awards at the CMAs in Nashville. The Handmaid’s Tale wraps its next-to-last season with more trauma for ex-handmaid June. History’s long-running Pawn Stars spins off for an eight-episode road trip across America. 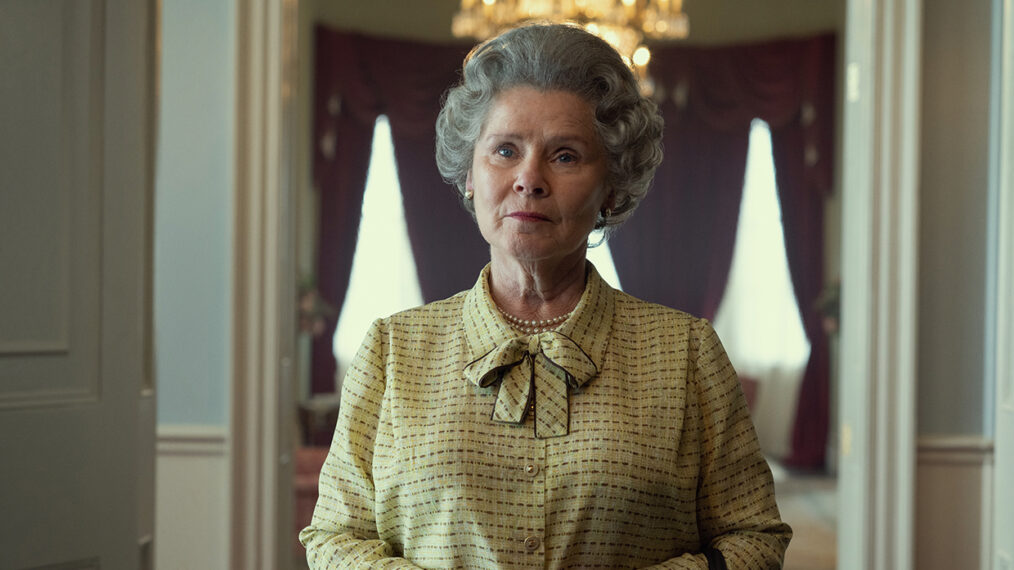 “Even the televisions are metaphors in this place,” tut-tuts Queen Elizabeth II (the great character actress Imelda Staunton) as her grandson William fiddles with her ancient set, one of many symbols reminding the monarch that she has seen better days. The fifth, and next-to-last, season of Peter Morgan’s loosely fact-based drama about the British royals stars Jonathan Pryce as the Queen’s increasingly distant soulmate Prince Philip, Dominic West as a restless Prince Charles and the uncanny Elizabeth Debecki as a coy, wounded Diana, spilling her dark secrets to any tabloid ear that will listen. For the Queen, it truly is an annus horribilis. (See the full review.) In a highlight of the CMAs from Nashville’s Bridgestone Arena, hosted by Luke Bryan and Peyton Manning, the 2022 Willie Nelson Lifetime Achievement Award goes to Alan Jackson, with all-stars Dierks Bentley, Jon Pardi, Carrie Underwood and Lainey Wilson participating in a musical tribute. Reigning Entertainer of the Year Luke Combs is nominated again, with Miranda Lambert, Chris Stapleton, Underwood and Morgan Wallen in the mix. With six nominations, Wilson leads the field, and is up for New Artist of the Year against HARDY, Walker Hayes, Cody Johnson and Parker McCollum. Elisabeth Moss directs the dystopian drama’s Season 5 finale, staging yet another harrowing ordeal for her character of ex-handmaid June. She concedes, “We have to run” after violent events convince her that Toronto, now hostile to refugees, is no longer a safe haven. As her family prepares to flee amid a tidal exodus, the imagery is more relevant than ever. And so is her warning that no government is immune from totalitarian influence if people let it happen: “America wasn’t Gilead—until it was.” If you can’t bring your treasures to the Las Vegas pawn shop immortalized on the long-running Pawn Stars, then maybe they can bring their business to you. That’s the impetus of this eight-week spinoff, consisting of two-hour episodes in which Rick Harrison, son Corey and the irrepressible Austin “Chumlee” Russell leave the World Famous Gold & Silver Pawn Shop to hit the road and assess items of infinite coolness while taking local field trips. The journey begins in Denver, where experts help determine the worth of objects including a Roman cauldron handle and JFK signatures. In their spare time, Corey and Chumlee hope to strike it rich in a local gold mine. Future stops include Austin, Savannah, Seattle, Valley Forge, Winston-Salem, San Francisco and Washington, D.C. In the most broadly hilarious episode of the new season, “My Monkey Grifter” (inspired by the Oscar-winning My Octopus Teacher), an obsessive filmmaker (The Afterparty’s Jamie Demetriou) falls under the spell of Lulu, a zoo monkey, reading way too much into the animal’s possibly malicious inscrutability. “I put myself on her level and it was beautiful,” he says, shedding his clothes in front her cage. No way this ends well.

No northern giant hornets found in 2022 in Washington state

Police collecting U of I victims' personal belongings starting Wednesday

30-car pileup near Kittitas closes I-90