Showtime brings back Ray Donovan for a movie-length finale to bring closure to the dark drama. Denzel Washington and Frances McDormand headline Joel Coen’s atmospheric rendering of The Tragedy of Macbeth, generating Oscar buzz. Ricky Gervais’ moving dramedy After Life drops its third and final season. A Shock Docs special revisits the crime spree of a killer said to have inspired the antics behind Scream (a new version of which opens this weekend). What matters most in this feature-length sequel is that it represents Ray Donovan: The Ending—something of which fans were deprived when the series was abruptly canceled after seven seasons. Picking up from 2020’s bloody cliffhanger, the movie depicts a final reckoning between the moody fixer Ray (star and co-writer Liev Schreiber) and his wayward father Mickey (Jon Voight). Flashbacks that are a lot more satisfying than in last year’s Sopranos prequel The Many Saints of Newark feature their younger selves—Chris Gray as Ray and Bill Heck as a swaggering, charismatic Mickey—as they fatefully clash, setting up the schism that would fuel the series. (See the full review.) The Tragedy of Macbeth

Shakespeare has rarely felt more eternal onscreen than in director Joel Coen’s ravishingly bleak, tautly trimmed (at 105 minutes) version of the classic tragedy. Filmed in foggy, eerie black and white on cavernous soundstages that feel both theatrical and cinematic, harking back to silent-era expressionism, the oft-told tale of murder and hubris is stripped to its primal core. A haunted Denzel Washington (generated Oscar buzz) is Macbeth, balancing bloody ambition with fateful regret, and he’s well matched by Frances McDormand’s relentlessly fierce Lady Macbeth. But it’s Kathryn Hunter as the freaky terrifying witches who nearly steals this memorable show. Kindness is generally not the first thing that comes to mind when you consider the work of Ricky Gervais (The Office, Extras), but this touching dramedy about life, loss and healing is a minor masterpiece of compassionate storytelling. The third and final season catches up with Tony (Gervais), a small-town newspaper guy who’s now grieving his dad as well as his late wife. With the help of his offbeat co-workers and a community of friends, life goes on for Tony, which is good news for us all. 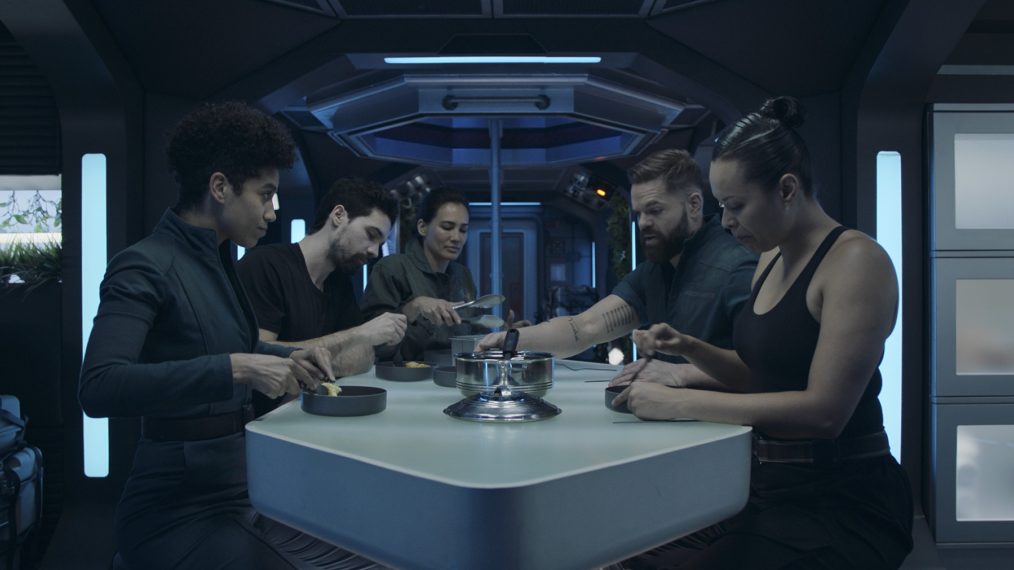 Also calling it a cosmic day after six seasons is this epic space opera, setting up a climactic showdown between the Roci and Marco’s Free Navy, with a hope for peace if the Inner Planets and the Belt can finally be unified. How’s this for typecasting? Jimmy Buffett guests on the long-running police drama as a Jimmy Buffett impersonator who runs afoul of Danny (Donnie Wahlberg). Regina Taylor guests as NYPD Captain Terrell, who falls under Frank’s (Tom Selleck) scrutiny after she allegedly uses her rank to scam goods from local stores. A two-hour Shock Docs special takes a paranormal approach to revisiting the crimes of a serial killer said to be the inspiration for the hit Scream movie franchise (whose latest chapter opens in theaters this weekend). The Gainesville Ripper, aka Danny Rolling, terrorized Shreveport, Louisiana and Gainesville, Florida, starting in 1989, murdering eight people including five college students. Claiming to have been possessed by a demon named Gemini, Rolling was convicted and later executed in 2006. Paranormal investigator Steve Shippy and psychic medium Cindy Kaza team up to investigate the demonic angle.

When you should go to the emergency room, urgent care or primary care

Court records: Man shot in the face had approached suspect over slashed tires

Victim in Newport hit-and-run identified, no suspect in custody

'Most concerning waves': This is when experts predict omicron will peak and what will happen afterward

When you should go to the emergency room, urgent care or primary care