Personal loan rates from banks, credit unions and online lenders are up after repeated interest rate hikes from the Federal Reserve this year, the latest of which came last week.

The finance rate on 24-month personal loans from banks jumped from 8.73% in May to 10.16% in August, according to the latest data from the Federal Reserve Bank of St. Louis. The average annual percentage rate on 36-month credit union loans rose from 8.84% in June to 9.15% in September, according to the National Credit Union Administration.

Why are personal loan rates rising?

Until recently, lenders have kept rates relatively low for a few reasons.

Personal loan rates are somewhat tied to supply and demand, which is why they don’t follow the Federal Funds rate as closely as other financial products like mortgages do, says Werner Loots, U.S. Bank’s executive vice president of direct consumer lending.

And demand for personal loans has been high this year, Loots says, in part because personal loans are an attractive, fixed-rate financing option that can be used for almost anything at a time when prices are high for almost everything.

But the Fed and the state of the economy could be putting pressure on lenders. A rising Fed rate, coupled with fears of an economic downturn, may push lenders to tighten their borrowing criteria and make fewer loans overall, triggering higher personal loan rates.

“If you’re not making as many loans and your cost of borrowing is going up, there’s no incentive for you to keep rates down and try to get as many consumers through the door,” Chand says. 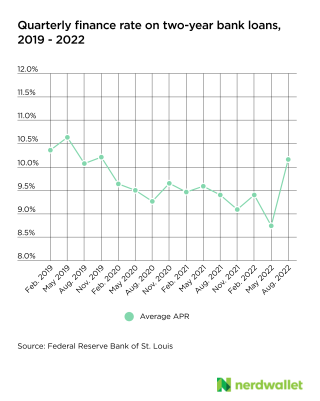 Is it harder to qualify for a personal loan?

Lenders could tighten underwriting criteria if they believe a recession is likely, Chand says.

Because unsecured personal loans don’t require collateral, lenders rely on applicants’ credit profiles and finances to determine whether a borrower is likely to repay the loan.

Personal loan delinquency rates — the percentage of all loans that have past-due payments — have been steadily rising this year, and in the third quarter surpassed pre-pandemic levels, according to a credit industry report from TransUnion.

Rising delinquency rates are one signal lenders use to decide whether to tighten approval standards, Chand says. If they do, consumers with fair or bad credit scores (generally below 689) could struggle to qualify.

Growing unemployment could also trigger tougher borrowing standards because lenders are worried about making loans to consumers who could be laid off, says Katherine Fox, a certified financial planner and founder of Sunnybranch Wealth based in Portland, Oregon.

So far this year, unemployment has remained consistently low.

Even if lenders don’t tighten their approval criteria, higher rates mean you may qualify for a lower loan amount than you would have earlier this year, Fox says.

When deciding whether to approve your application, lenders review how much of your monthly income goes toward debt payments, also called your debt-to-income ratio. They include the potential personal loan payment in that calculation.

For example, if a lender only accepts borrowers with DTIs below 40%, that would mean all of your current debt payments, plus your new personal loan payment, couldn’t cost more than 40% of your monthly income.

Higher personal loan rates mean higher monthly payments, so a lender may approve you for a smaller loan to avoid overextending you, she says.

Is now a good time to get a personal loan?

Your rate today may not be as low as it would have been a few months ago, Fox says, but it could get higher.

If you’re planning to apply for a personal loan in the coming months, it’s smart to shop around and lock in a rate before they rise again, she says.

For non-urgent expenses like home improvements and vacations, getting the most ideal APR means waiting. If rates do fall, it probably won’t be for at least a few months, Fox says.

“It’s either act fast or be totally flexible because that rate drop might come sooner than any of us think it will or it might take longer,” she says.

Rates are up across other financial products like home equity loans and credit cards, but it’s still smart to compare other options to see where you get the lowest rate, says Ian Bloom, CFP and owner of Open World Financial Life Planning in Raleigh, North Carolina.

Those with enough equity in their homes may get a better rate on equity financing than they would on a personal loan, and consumers with strong credit may qualify for a 0% APR credit card, he says. With a zero-interest credit card, pay the balance during the promotional period to avoid a high rate.

Rising APRs mean you may have to take more steps to get a low rate. Here are some tips to improve your chances of qualifying for an affordable loan.

Pre-qualify. Pre-qualifying lets you check your personal loan amount, rate and repayment term without a ding to your credit. Online lenders, banks and credit unions offer pre-qualification — and even if your bank doesn’t, you can take a pre-qualified offer to it and ask if it’ll beat that offer.

Consider a co-applicant or collateral. If your credit or DTI could prevent you from getting a low rate, consider a co-signed, joint or secured loan. With a co-signed or joint loan, you add someone with better credit and a higher income to your application, and they promise to repay the loan if you fail to do so. With a secured loan, you provide collateral in exchange for a lower rate or larger loan, but the lender can take the property if you miss payments.

Santa Claus is coming to South Hill this December