Mars is littered with 15,694 pounds of human trash from 50 years of robotic exploration 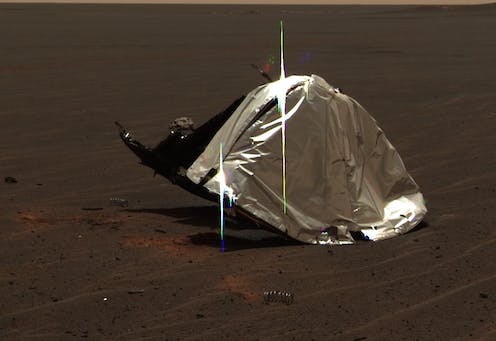 Rovers on Mars frequently come across debris — like this heat shield and spring — from their own or other missions. NASA/JPL-Caltech

People have been exploring the surface of Mars for over 50 years. According to the United Nations Office for Outer Space Affairs, nations have sent 18 human-made objects to Mars over 14 separate missions. Many of these missions are still ongoing, but over the decades of Martian exploration, humankind has left behind many pieces of debris on the planet’s surface.

I am a postdoctoral research fellow who studies ways to track Mars and moon rovers. In mid-August 2022, NASA confirmed that the Mars rover Perseverance had spotted a piece of trash jettisoned during its landing, this time a tangled mess of netting. And this is not the first time scientists have found trash on Mars. That’s because there is a lot there. 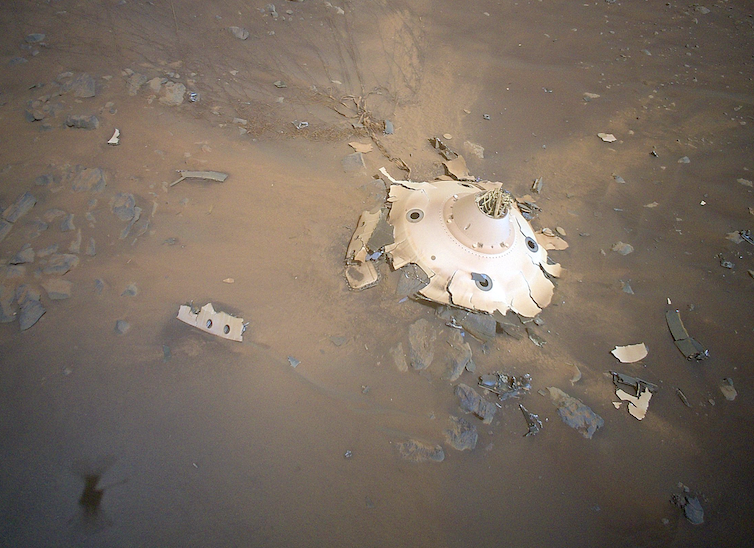 All spacecraft that land on Mars eject equipment — like this protective shell — on their way to the Martian surface. NASA/JPL-Caltech

Where does the debris come from?

Every mission to the Martian surface requires a module that protects the spacecraft. This module includes a heat shield for when the craft passes through the planet’s atmosphere and a parachute and landing hardware so that it can land softly.

The craft discards pieces of the module as it descends, and these pieces can land in different locations on the planet’s surface — there may be a lower heat shield in one place and a parachute in another. When this debris crashes to the ground, it can break into smaller pieces, as happened during the Perseverance rover landing in 2021. These small pieces can then get blown around because of Martian winds. 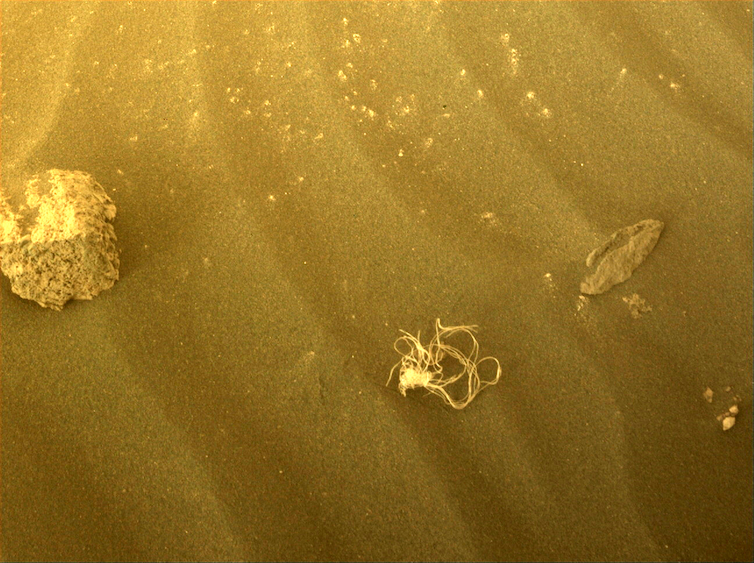 The Perseverance rover came across this piece of netting on July 12, 2022, more than a year after landing on Mars. NASA/JPL-Caltech

A lot of small, windblown trash has been found over the years — like the netting material found recently. Earlier in the year, on June 13, 2022, Perseverance rover spotted a large, shiny thermal blanket wedged in some rocks 1.25 miles (2 km) from where the rover landed. Both Curiosity in 2012 and Opportunity in 2005 also came across debris from their landing vehicles. 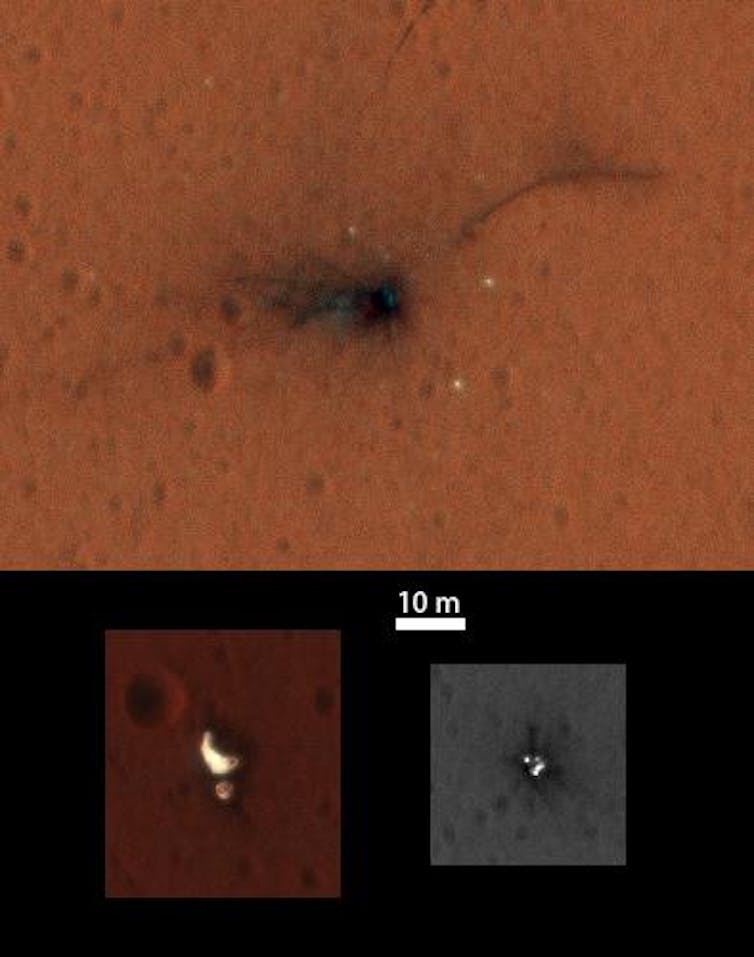 The European Space Agency’s Schiaparelli lander crashed onto the surface of Mars in 2016, as seen in these photos of the crash site captured by NASA’s Mars Reconnaissance Orbiter. NASA/JPL-Caltech/Univ. of Arizona

The nine inactive spacecraft on the surface of Mars make up the next type of debris. These craft are the Mars 3 lander, Mars 6 lander, Viking 1 lander, Viking 2 lander, the Sojourner rover, the formerly lost Beagle 2 lander, the Phoenix lander, the Spirit rover and the most recently deceased spacecraft, the Opportunity rover. Mostly intact, these might be better considered historical relics than trash.

Wear and tear take their toll on everything on the Martian surface. Some parts of Curiosity’s aluminum wheels have broken off and are presumably scattered along the rover’s track. Some of the litter is purposeful, with Perseverance having dropped a drill bit onto the surface in July 2021, allowing it to swap in a new, pristine bit so that it could keep collecting samples. 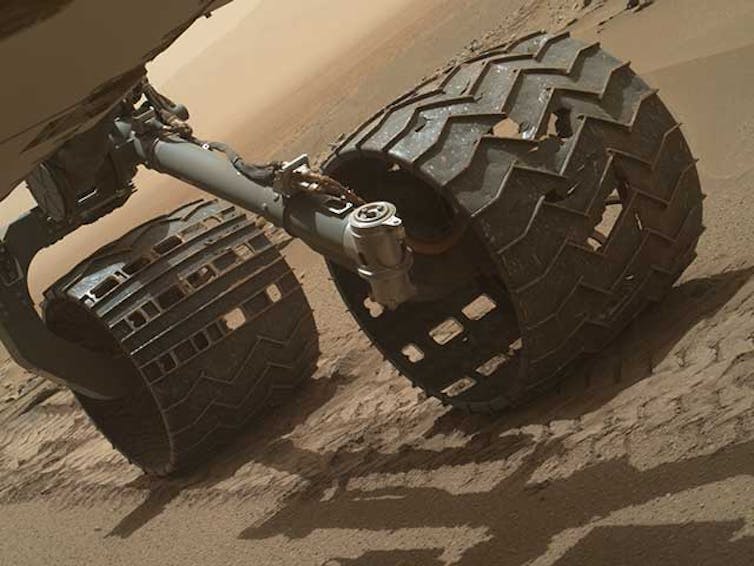 The wheels of the Curiosity rover have taken damage over the years, leaving behind small bits of aluminum. NASA/JPL-Caltech

Crashed spacecraft and their pieces are another significant source of trash. At least two spacecraft have crashed, and an additional four have lost contact before or just after landing. Safely descending to the planet’s surface is the hardest part of any Mars landing mission — and it doesn’t always end well.

Why does trash matter?

Today, the main concern scientists have about trash on Mars is the risk it poses to current and future missions. The Perseverance teams are documenting all debris they find and checking to see if any of it could contaminate the samples the rover is collecting. NASA engineers have also considered whether Perseverance could get tangled in debris from the landing but have concluded the risk is low.

The real reason debris on Mars is important is because of its place in history. The spacecraft and their pieces are the early milestones for human planetary exploration.

Cagri Kilic does not work for, consult, own shares in or receive funding from any company or organization that would benefit from this article, and has disclosed no relevant affiliations beyond their academic appointment.