Guns on the ballot: How mixed midterm results will affect firearm policy

The U.S. midterm elections took place on the backdrop of surging gun violence and in a year scarred by high-profile mass shootings.

And though exit polls indicated that abortion rights and inflation were the top motivating issues for voters, views toward guns also played a significant role. Indeed, a survey by Edison Research found that around 1 in 10 voters listed gun policy as their top concern. 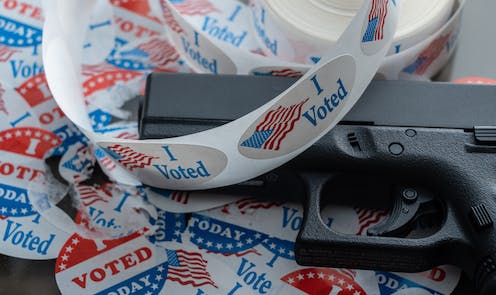 One in 10 American voters listed guns as their top concern. iStock / Getty Images Plus

That guns were in the mind of many voters should not be too much of a surprise. In 2020, there were a record number of gun deaths, and data for 2021 shows a continuing increase. Disparities in gun violence widened — in 2020, the firearm homicide rate for young Black men was over 20 times greater than the rate for young white men. The midterms were also the first national vote since the tragic mass shootings in Uvalde, Texas; Buffalo, New York; and Highland Park, Illinois.

The midterm elections offered voters the opportunity to affect gun policy in two ways. First, it gave voters the chance to elect local, state and national officials who will have a say in which gun violence strategies are considered and implemented. And second, in two states — Iowa and Oregon — residents voted on gun rights and gun violence initiatives. The mixed results in these initiatives, in particular, reveal much about the state of gun policy in the United States.

In the two states in which guns appeared explicitly on ballots, voters approved measures that moved state gun laws in opposite directions. Iowa passed a constitutional amendment that enshrined a right to bear arms and specified a standard for judicial review of gun laws, while Oregon voters passed an initiative that requires a permit to buy a firearm and bans large capacity ammunition magazines.

Around two-thirds of Iowans voted to add the right to bear arms to the state constitution. This amendment brings Iowa in line with 44 states that have similar provisions.

Iowa’s amendment differs from most by also setting a strict scrutiny standard for evaluating gun restrictions. Under strict scrutiny, a state law will only be upheld by a court if it is narrowly tailored to further a compelling government interest. Researchers have not studied how these provisions affect gun violence, but this amendment is part of an overall trend in Iowa toward deregulating guns. The state began allowing the carrying of concealed handguns without a license and repealed its longstanding law requiring a permit to purchase a handgun. Research has found that both of these changes are associated with increases in gun violence.

Meanwhile, Oregon voters narrowly approved an initiative adopting a permit-to-purchase law. Under Oregon Measure 114, all would-be gun buyers will be required to first acquire a permit from local law enforcement. To acquire a permit, applicants will need to be fingerprinted, pass a background check and undergo safety training.

Research has consistently shown that laws requiring a permit to purchase a gun are associated with reductions in homicide, suicide, mass shooting incidents and other measures of gun crime.

Despite this evidence, only nine other states and Washington, D.C., have this policy, and Oregon will be the first state to adopt it since Maryland in 2013. In addition, the Oregon initiative institutes a ban on large-capacity magazines — those that hold more than 10 rounds and allow shooters to fire for longer periods before reloading. Bans of these devices have been associated with reductions in mass shootings.

The midterms were the first general elections since the Supreme Court set a new standard for evaluating gun laws under the Second Amendment. Under the Bruen ruling, which came down in June 2022, courts must assess whether a gun law is consistent with the “historical tradition of firearm regulation” in the U.S. In its opinion, the court failed to provide an adequate framework for lower courts to use for this analysis. Despite the lack of clarity, this standard will affect implementation of Iowa’s and Oregon’s new policies.

The fact that Iowa’s constitutional amendment requires analysis of state gun laws under a strict scrutiny standard creates a difficult situation for state judges, who may have to grapple with both strict scrutiny and the historical tradition test from the Bruen ruling.

Laws requiring a permit to purchase are popular, but they will almost certainly be challenged either in Oregon or in one of the other nine states with such a policy. For the law to be upheld, a court would need to find that such a law was consistent with the country’s history and tradition of firearm regulation. Rigorous historical analyses have proved difficult for courts.

Despite the confusion created by the Supreme Court, the midterm election results indicate that gun violence remains an important issue for voters and elected officials.

At the state and local level, young candidates who ran campaigns centered on gun violence prevention were elected. Control of some state legislatures and executive branches shifted from one party to the other and, as of this writing, control of the U.S. House of Representatives will come down to several close contests.

The outcomes of these state and local elections will dramatically affect the likelihood that gun violence prevention legislation and programs are considered and implemented in the coming months.

Alex McCourt receives funding from The Joyce Foundation, The David and Lucille Packard Foundation, the Centers for Disease Control and Prevention, Missouri Foundation for Health, and the National Collaborative on Gun Violence Research.

The cold has settled in - Mark

The cold has settled in - Mark