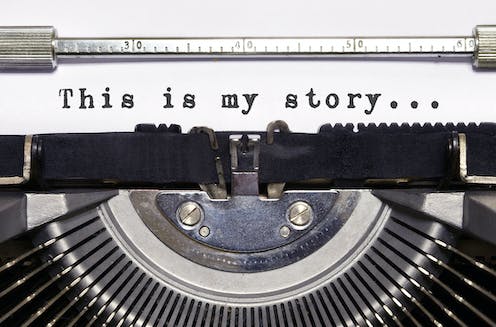 Words can have a powerful effect on people, even when they’re generated by an unthinking machine. iStock via Getty Images

When you read a sentence like this one, your past experience tells you that it’s written by a thinking, feeling human. And, in this case, there is indeed a human typing these words: [Hi, there!] But these days, some sentences that appear remarkably humanlike are actually generated by artificial intelligence systems trained on massive amounts of human text.

People are so accustomed to assuming that fluent language comes from a thinking, feeling human that evidence to the contrary can be difficult to wrap your head around. How are people likely to navigate this relatively uncharted territory? Because of a persistent tendency to associate fluent expression with fluent thought, it is natural — but potentially misleading — to think that if an AI model can express itself fluently, that means it thinks and feels just like humans do.

Thus, it is perhaps unsurprising that a former Google engineer recently claimed that Google’s AI system LaMDA has a sense of self because it can eloquently generate text about its purported feelings. This event and the subsequent media coverage led to a number of rightly skeptical articles and posts about the claim that computational models of human language are sentient, meaning capable of thinking and feeling and experiencing.

The question of what it would mean for an AI model to be sentient is complicated (see, for instance, our colleague’s take), and our goal here is not to settle it. But as language researchers, we can use our work in cognitive science and linguistics to explain why it is all too easy for humans to fall into the cognitive trap of thinking that an entity that can use language fluently is sentient, conscious or intelligent.

Text generated by models like Google’s LaMDA can be hard to distinguish from text written by humans. This impressive achievement is a result of a decadeslong program to build models that generate grammatical, meaningful language. 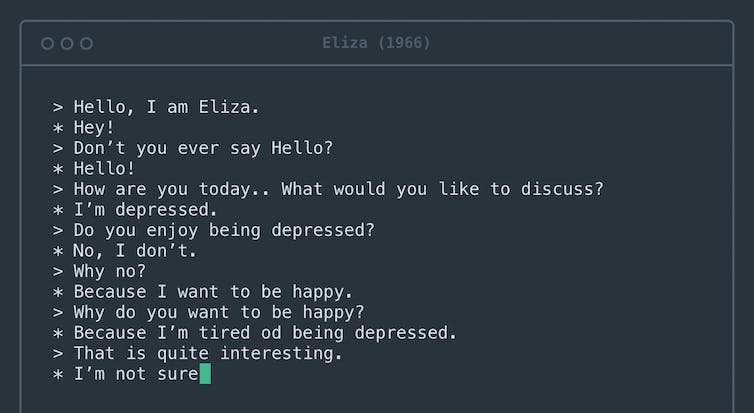 The first computer system to engage people in dialogue was psychotherapy software called Eliza, built more than half a century ago. Rosenfeld Media/Flickr, CC BY

Today’s models, sets of data and rules that approximate human language, differ from these early attempts in several important ways. First, they are trained on essentially the entire internet. Second, they can learn relationships between words that are far apart, not just words that are neighbors. Third, they are tuned by a huge number of internal “knobs” – so many that it is hard for even the engineers who design them to understand why they generate one sequence of words rather than another.

The models’ task, however, remains the same as in the 1950s: determine which word is likely to come next. Today, they are so good at this task that almost all sentences they generate seem fluid and grammatical.

But how did GPT-3 come up with this paragraph? By generating a word that fit the context we provided. And then another one. And then another one. The model never saw, touched or tasted pineapples — it just processed all the texts on the internet that mention them. And yet reading this paragraph can lead the human mind — even that of a Google engineer — to imagine GPT-3 as an intelligent being that can reason about peanut butter and pineapple dishes.

Large AI language models can engage in fluent conversation. However, they have no overall message to communicate, so their phrases often follow common literary tropes, extracted from the texts they were trained on. For instance, if prompted with the topic “the nature of love,” the model might generate sentences about believing that love conquers all. The human brain primes the viewer to interpret these words as the model’s opinion on the topic, but they are simply a plausible sequence of words.

The human brain is hardwired to infer intentions behind words. Every time you engage in conversation, your mind automatically constructs a mental model of your conversation partner. You then use the words they say to fill in the model with that person’s goals, feelings and beliefs.

The process of jumping from words to the mental model is seamless, getting triggered every time you receive a fully fledged sentence. This cognitive process saves you a lot of time and effort in everyday life, greatly facilitating your social interactions.

However, in the case of AI systems, it misfires — building a mental model out of thin air.

The text in this case is as fluent as our example with pineapples, but this time the model is saying something decidedly less sensible. One begins to suspect that GPT-3 has never actually tried peanut butter and feathers.

Ascribing intelligence to machines, denying it to humans

A sad irony is that the same cognitive bias that makes people ascribe humanity to GPT-3 can cause them to treat actual humans in inhumane ways. Sociocultural linguistics — the study of language in its social and cultural context — shows that assuming an overly tight link between fluent expression and fluent thinking can lead to bias against people who speak differently.

For instance, people with a foreign accent are often perceived as less intelligent and are less likely to get the jobs they are qualified for. Similar biases exist against speakers of dialects that are not considered prestigious, such as Southern English in the U.S., against deaf people using sign languages and against people with speech impediments such as stuttering.

These biases are deeply harmful, often lead to racist and sexist assumptions, and have been shown again and again to be unfounded.

Will AI ever become sentient? This question requires deep consideration, and indeed philosophers have pondered it for decades. What researchers have determined, however, is that you cannot simply trust a language model when it tells you how it feels. Words can be misleading, and it is all too easy to mistake fluent speech for fluent thought.

Joshua B. Tenenbaum receives relevant funding from NSF, the US Department of Defense, IBM, Google, and Microsoft.

Anna A. Ivanova and Idan Asher Blank do not work for, consult, own shares in or receive funding from any company or organization that would benefit from this article, and have disclosed no relevant affiliations beyond their academic appointment.

Northbound SR 195 interchange to I-90 back open after crash

'It's a real challenge for us': Hospitals struggle with lack of long-term care options

Apple warns of security flaw for iPhones, iPads and Macs