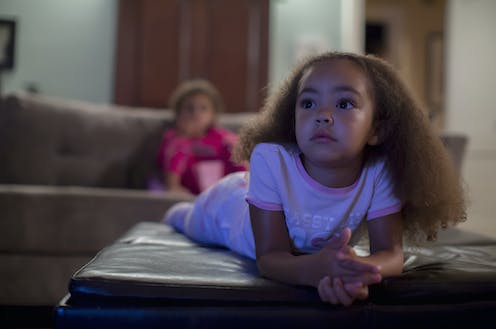 With the ever-increasing media coverage of mass shootings in the U.S., even the youngest children are now repeatedly exposed to violent images on TV and online. Blend Images/Inti St Clair/Tetra Images via Getty Images

Over 100 mass shootings have taken place in the U.S. since the rampage in Uvalde, Texas, on May 24, 2022. Not a single week in 2022 has passed without at least four mass shootings.

With gun violence, war and other tragedies in the news, children are often exposed to scary images and information.

Parents and caregivers are faced with the dilemma of wondering how to speak with their children about the unspeakable. How can adults help children feel safe when imagery about tragedies abounds throughout the media?

We are communication scholars who specialize in children and media. We have extensively studied children’s views of and responses to violence in the media. Our research findings and those of other scholars offer insights into how news can contribute to children’s fears and on how to help children cope.

Surrounded by news and information

In an era of 24-hour news coverage, it is likely that children will come across disturbing news content. For some kids, this exposure is deliberate. Teenagers report that they find it important to follow current events. And more than half of teens get their news from social media and slightly fewer get their news from YouTube.

Children under 12 show little interest in the news, yet many still encounter it. Young children’s news exposure is almost always accidental, either through background television viewing or through family discussions of current events.

No matter how much parents or caregivers try to shield children, then, they are likely to come upon the news.

The news as a catalyst for fear

Several studies have examined children’s fear responses to news. Six months after the 2013 Boston Marathon bombing, Boston-area parents reported that children who viewed more news coverage on the day of the attack were more likely to display symptoms of post-traumatic stress disorder, have behavior problems and show hyperactivity and/or inattention than children who watched less news.

More recently, an international survey of over 4,000 9-to-13-year-olds from 42 countries found that over half of the children were scared by news stories about the COVID-19 pandemic.

Fear and anxiety can also be spurred by exposure to news events that are more commonplace. In a 2012 study of elementary school children in California, nearly half of them said they saw something on the news that made them scared. The news stories that were most frequently mentioned were natural disasters, kidnappings and burglaries.

Sadly, we live in a country where gun violence is common. A 2022 study found that children’s exposure to news coverage of mass shootings not only made them afraid for their personal safety, but was correlated with the belief that their school and society at large were dangerous.

Whether catastrophic or common, fear reactions endure. A survey of college students found that 50% of them could remember a specific news story that they had seen during childhood that frightened, worried or upset them. The effects included feeling scared and being unable to sleep. And 7% of participants said they were still frightened of that event at their present college age.

How to talk with kids about tragedies and traumatic events.

Age of the child matters

Clearly, media can frighten children and adolescents. But decades of research show that fright-inducing content does not affect all children the same way. Young children demonstrate what researchers call “perceptual dependence,” which means that they react to stimuli in terms of what those stimuli look, sound or feel like.

As children mature, they develop the capacity to be frightened by abstract threats. Studies of children’s reactions to news coverage of wars show that although children of all ages are affected, younger kids respond mainly to the visual aspects of coverage such as homes torn apart, whereas older children are more responsive to abstract aspects such as fears that the conflict will spread.

How to help children cope

Just as age affects how children absorb the news, age also influences which strategies are most effective in helping children cope. Noncognitive strategies typically involve avoidance or distraction. Closing one’s eyes, holding on to an attachment object, leaving the room or avoiding news altogether are examples. These strategies work best with younger children.

Cognitive strategies require the child to think about whatever is frightening them in a different way, with an adult often providing a verbal explanation to help. These strategies work best with older children. When dealing with depictions of fantasy, for example, a cognitive strategy that is quite effective is reminding children that what they see “is not real.”

Unfortunately, mass shootings are real. In these cases, the adult can emphasize that the news event is over, that it was far away or that such events are rare. Providing a reassuring message — that the child is safe and loved — also helps.

Recommendations for the youngest kids

For kids under 7, it is critical to limit exposure to the news. Watching a tragedy on the news can include graphic images and sounds. Very young children will not understand that what they see are replays of the same event and not another tragedy happening again.

Reassure the child. Kids at this age are most worried about their personal safety. It’s important to make them feel safe, even when the adults themselves are worried, as studies show that fear is contagious.

Distraction is also helpful. Although it is important to listen and not downplay concerns, doing something fun together that takes a child’s mind off what is happening can go a long way.

For kids between the ages of 8 and 12, it is still important to limit exposure. Admittedly this is more challenging as children age. But making a concerted effort to turn off the news is helpful, especially if the child is sensitive.

Talk about news. If kids go online, try to go with them. Consider setting URLs to open to nonnews portals.

Be available for conversation. Ask kids about what they know. Correct any misconceptions with facts. Listen carefully and ask what questions kids have, and then respond honestly with a focus on the basics. Reassure children that they’re safe and that it is OK to feel upset.

Do something to help. Consider ways to help survivors and their loved ones.

Dialing in with teens’ needs

When it comes to teens, it is critically important to check in. In all likelihood, teens learn of news events independent of their parents. But parents and caregivers should offer to talk with them to get a sense of what they know about the situation. This also gives the adult an opportunity to listen to underlying fears and offer insights. Again, try to address concerns without dismissing or minimizing them.

Help teens develop news literacy. If parents or caregivers disagree with how a news event is portrayed in the media, they should discuss this with their child. Emphasizing that there can be misinformation, repetition or exaggeration might help teens put tragic events into a wider perspective.

The authors do not work for, consult, own shares in or receive funding from any company or organization that would benefit from this article, and have disclosed no relevant affiliations beyond their academic appointment.