If you always did what was good for you, you’d likely book flights months in advance to get better deals. But then again, you’d also probably eat the daily recommended servings of vegetables, work out daily and get eight hours of sleep a night.

Even if you know you should, you probably won’t every time. And if you find yourself booking a quickly-approaching flight, you might be cringing at the prices.

This is where airline miles can come in handy. On those occasions when you waited a little too long to book a flight, you might be able to save cash on expensive last-minute airfares by redeeming miles instead. First, however, it’s important to remember that your airline miles are worth something, and you shouldn’t just use them on any random flight as a last resort.

NerdWallet conducted an annual analysis of airline miles to find the baseline dollar value you should aim for when redeeming miles for economy flights. The analysis compared the cash prices and award prices (the number of miles needed to book) on more than 700 flights that were 15 days out (last-minute) and 180 days from the date of departure, as well as during the holiday season (defined as flights departing on Dec. 18 and returning on Dec. 29).

The findings show that there isn’t a massive difference in the baseline value if you use airline miles for flights in about two weeks or six months. Still, some airlines are better than others if you need to book cheap, last-minute flights on points.

Several takeaways emerge when we examine how airline mile values changed whether a flight was in a few weeks or months. 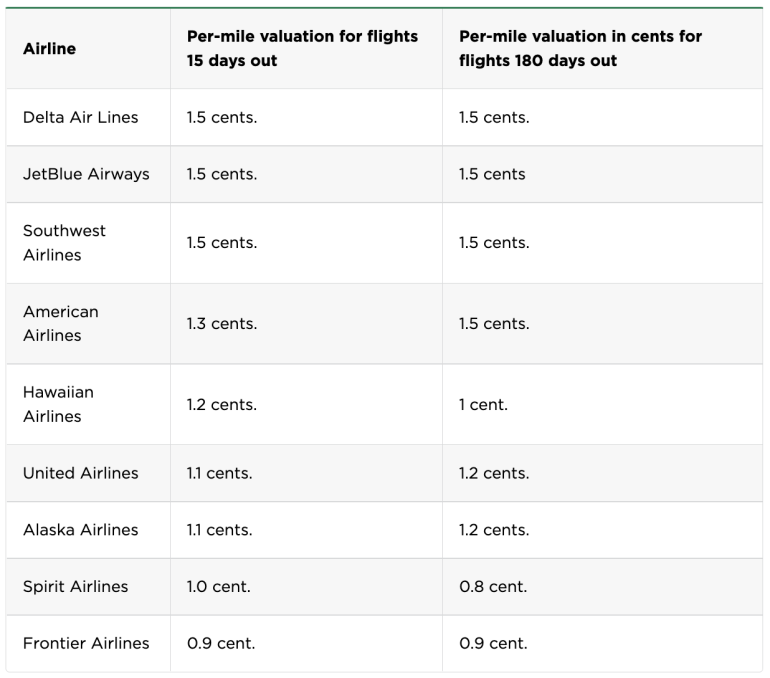 Delta, JetBlue and Southwest are tied for first in the rankings of highest-value airline miles. So whether you use them for last-minute flights or flights in six months, you can expect to get about the same per-mile value: 1.5 cents.

Meanwhile, the other two major full-service airlines in the U.S., American and United, don’t fare as well with last-minute flight bookings. American and United miles are generally worth less per mile when redeemed for flights 15 days out, as opposed to 180 days out.

For American, you should expect only to get about 1.3 cents per mile, compared to the usual 1.5 cents. With United, the difference is less stark, with only a 0.1 cent difference between the typical 1.2 cents and the 1.1 cents for last-minute bookings.

Surprisingly, two airlines exhibit the opposite. HawaiianMiles and Spirit points are worth more when you redeem them for flights 15 days out. It’s important to note, however, that Spirit charges a $50 fee to redeem points for flights less than 28 days before departure.

The rules change for holiday travel

If you’re sitting on a stack of Delta, JetBlue or Southwest points, you might think you already hold the key to cheap holiday flights: wait until the week or two before the winter holidays and book last-minute.

You might want to act quickly, as you don’t want to miss the ideal booking window to snag the cheaper deals. Holiday flights are almost on another planet pricing-wise and often buck the norms for travel at other times of the year. Data from the travel booking site Priceline shows the cheapest days for airfare in the next three months will be the first five days of December this year.

According to NerdWallet’s analysis, American, Delta, Southwest and Frontier were the best airlines for holiday travel on points with a 1.4 cent-per-mile valuation.

Other ways to save money on last-minute flights

With airfares up 43% compared to last year, according to the latest Consumer Price Index data, using miles might be your best option if you don’t have the cash on hand for an expensive last-minute flight.

From now on, though, do yourself a favor and book the flight ahead. Your budget-conscious, vegetable-eating future self will thank you, and you can save your miles for the real sweet spots.